Mies van der Perk’s life is completely dedicated to her art. Her living room is also an studio, including easel and a well-filled cupboard with materials.  Furthermore there’s an antique table with chairs and a comfortable easy chair placed opposite to an enormous flat screen television. Van der Perk draws regularly sporting dancing or music making people, inspired by television images. These speed drawings in pencil, graphic or drawing pencil made on small sized papers. Sometimes elaborates with acrylics, ink or watercolors on canvas, or luxury drawing paper. Roaming through her work, one can see quite well how she used different styles through the years and how she keeps seeking for a style, that could express her feelings most accurately. Her sketch albums appear to be silent witnesses of a remarkable process of development.

At primary school in the south of Rotterdam Mies van der Perk showed a remarkable talent for drawing. She didn’t have good school results, but every teacher praised her drawing skills, they advised her to develop herself in that field. Because her father, brothers and sisters had to work in order to feed and clothe the big family, Mies worked at home for quite a while. They were very poor. She still has specific memories of the “Hunger winter” (World war II, when there was a lack of food in the Netherlands and food was rationed ) and the arrival of the Americans with their “delicious cookies and chocolate”. During the rebuilding of the Netherlands after the second World war, hard work and a sober living were part of life. At 29 she did housekeeping in two different hospitals. Mies has mixed feelings about that time. On the one side she was bullied by colleagues, but it was also a time of rediscovering her creative side. With a friendly colleague she made Christmas cards at a hobby club in the evenings. In a group of nature lovers at the NIVON organization she found back her old love for drawing. In a naïve style and with several materials and techniques she made charming scenes and landscapes, sometimes using an example, sometimes using her own imagination. Because she was not fully satisfied with the results, Mies took a course at the SKVR ( Rotterdam Foundation of Artistic Education). Inspired by great masters she started to experiment with different styles. Her portraits and figures, that she made at the beginning of the nineties, show influences of expressionism, surrealism and realism.

Overstrained
Because of cut backs and privatization in 1995 Mies lost her job. This caused a low point in her life. She got upset or , how she calls it herself, “overstrained”. She still has a problem discussing this period. She got disillusioned, was forced to move and became lonely. At the urgent request of a social worker she joint “Via Kunst “. This foundation dedicates itself to the creative talents of a group of so-called “drop-outs of society”, like the homeless and the addicted. This is an initiative of the “Pauluskerk” Foundation, lead by the well known reverent Hans Visser. Founder and art teacher, Jack van Mildert attended a workshop with the artists of Atelier Herenplaats, during his study at the Academy of Fine Arts. Since then he developed an interest for Outsider Art and the makers of this art form. From 1996 till 1999  Mies visited “Via Kunst” almost daily to work at her art in a professionally,  guided by Jack van Mildert. She learned a lot and felt a strong bond with her “master”. For the first time she started to exhibit her drawings and paintings in cafés and little galleries.
Her work at that time was quite academic and far from “Outsider Art”. Although she developed herself as an artist, she hadn’t developed her own style yet. She was quite sensitive for and dependent of other people’s opinions. She had a rather hard time when Jack left Via Kunst to concentrate completely on his own work. Mies respected his choice, but felt abandoned and lost once again. A new period of isolation and disconnection followed. Ghost from the past reappeared. She became destructive towards herself and her work. At the same time she started to express her emotions. Guided by her feelings of abundance, she produced a bizarre series of self portraits with hollow eyes and exaggerated, force and sad facial expressions. In these personal portraits  her own specific style was born.

Straws
In this dark period there was one straw Mies caught, a straw that she still considers saved her life. Her contact with Jack Vreeke. Van Mildert knew Vreeke as an art teacher at the Fontys Academy in Eindhoven and as an enthusiastic collector of Outsider Art. As teaching material for his students, Vreeke built up an art collection, called “Extraordinary Images”. This art work of mainly outsider artists from all over the country he considers being “a collection of collections”( Out of Art, may 2006, page 118 to 22) In this collection Mies’ work was included and in 1998 her pieces of work were exhibited within a group exhibition of the Academy. The thought that her work would be lost after her death, caused attacks of fear and panic. Therefore the  agreement was made that Vreeke would manage her oeuvre in the “Extraordinary Images” Collection. He visited her two or three times a year. Together they discussed her work, they made selections and finally her work was documented in Eindhoven. Mies cherishes these visits up until today and since then she learned to value her creations, that come straight out of her soul, herself. That a man like Vreeke admires her work and included her in his collection made Mies feel save and secure. During his visits to Herenplaats, Vreeke told me regularly about Mies van der Perk. Because of his retirement he asked us eventually to take over the visits to this artist. Because of the fact that for a longer period I have had the idea to start an atelier for talented (ex) psychiatric patients, in 2005 I took over the house calls. I was immediately impressed by her zest for work and the progresses she made. Her albums with photographs of her work and her living room fitted up as an atelier, told me much about her motivation to learn. Because of her painful experiences in her life, she became dependent on the opinions of others. She can completely cling herself to people that recognize her talent and see her as a special artist. I see it as a task to bring her back to her own abilities, to help her trust her development as an artist and to let het draw upon her own personal experiences.

Wailing Junkies and Dream drawings
During her  period with Via Kunst, Van der Perk got acquainted with (ex) junkies, who made music sometimes during openings of exhibitions and who had jam-sessions every Friday in the Pauluskerk on percussion instruments and stringed instruments. Although it took her some effort to get excepted by this group of addicts, she did succeed to draw her poses. Compelled by necessity she developed a style of jotting down quickly, without even looking at her drawing paper. These drawings are often little jewels. With a minimum of lines she dotted down a caricature of people that found themselves in their music. It seems as if Mies  recognizes herself in the tortured human soul, who expresses himself creatively. As the drawing proceeds so quickly, she has to let go of her thoughts. Especially in these drawings the authenticity of her work appears. As well as the sketches, later elaborated on canvas or large sized paper are worth looking at, even if they miss that quick, liberating discharge of a 2 minute sketch. On canvas her battle with other worlds becomes much clearer. Then she begins to wonder about “as it should be”, about the choice between realistic or abstract and between materials and techniques. There have always been artists, who chose dreams as source of inspiration or starting point of their artistic work. During my work at academy of fine arts I used these sources myself. I recently discovered a vivid dream life in Mies’ work, which she expresses more and more. This work was so “typically Mies”, that I hoped to see more of this. In the meantime she made a special intimate series of “dream drawings”, with a graphite pencil and white pastel. Some of them were exhibited at the beginning of 2008 in the stand of Herenplaats at the Outsider Art fair in New York. Most of the public considered the drawings being special, but because nothing had been sold, Mies was slightly disappointed. What she desires the most is being admired by a large public. Before she ends her life, she wants to be accepted and to be famous because of her work.

A new beginning
Perhaps that in a next phaze of her career expects of her work come together and she can work more from within herself to touch the soul of a bigger public. A new start has been made. Since the end of 2007 Mies van der Perk works in the by Herenplaats newly opened atelier for talented artists with a(n) (ex)psychiatric background. After a selection Mies also became part of this group. Here she works under professional guidance and she’s growing. In her contemporary work different kind of fazes of her art and life come together. It already looks impressive to me, but I cannot help to wish that one day she will be able to say, totally convinced: “That’s me, Mies van der Perk”. 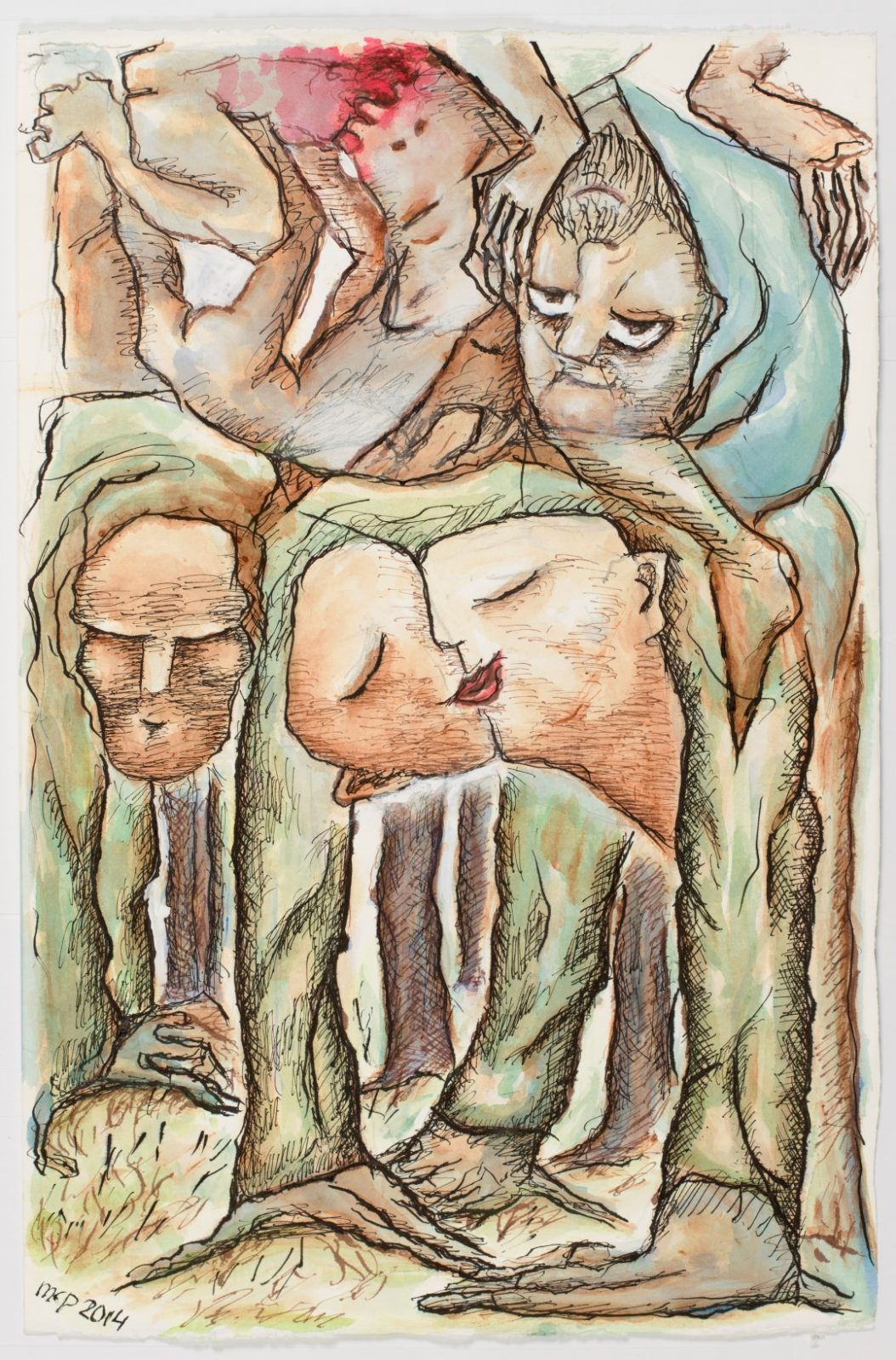 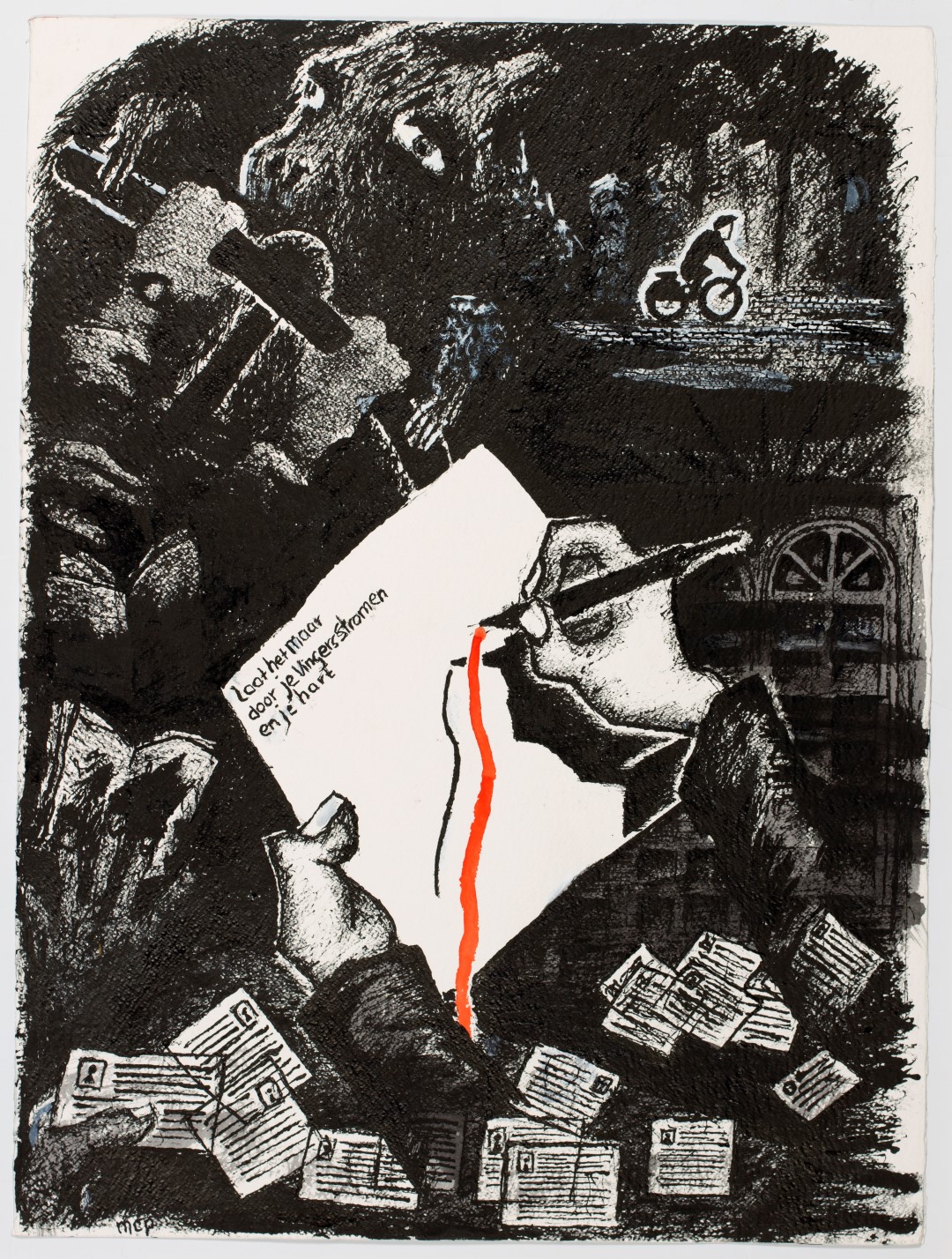 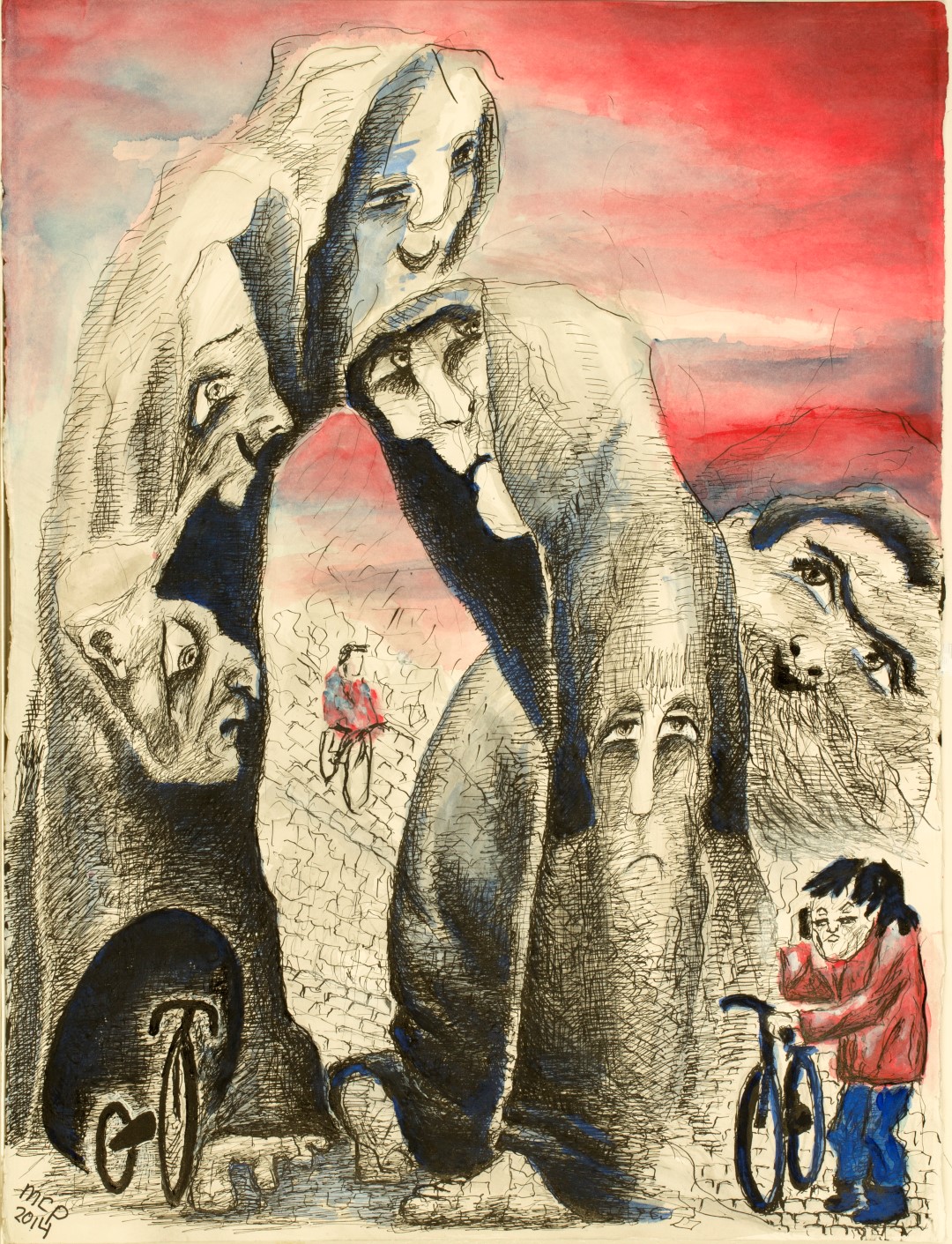 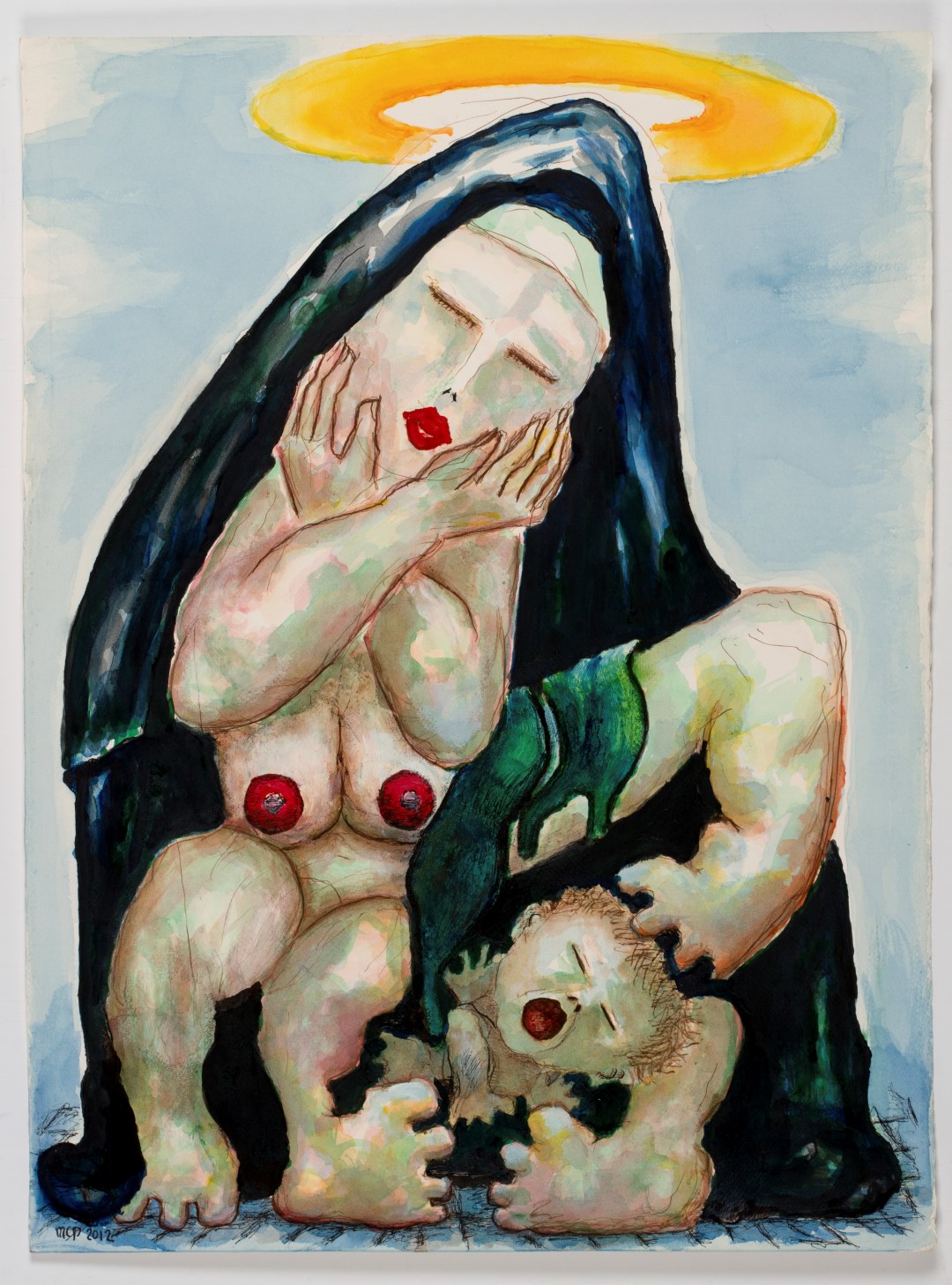