Carlos was born in 1973 in Neiva, Colombia. After his birth, mother and son moved in with relatives in the country. Carlos grew up there with his grandparents. In his early years of life, it was not yet known that he was mentally handicapped. It was only at the age of 4 that it became apparent that he was different from his peers. He moved to the capital Bogotá, where he followed special education. He was clearly interested in a specific area, namely in the sacred and religious. Even at a young age he could be found in churches, such as the church in the hamlet San Antonio, where he would sit for hours dreaming away next to the holy figures. The enormous figure of Christ on top of the Montserrat mountain in Bogotá has made an indelible impression on him, like a striking magical sign it is stamped on his memory. Worship and a feeling for spirituality still play an important role for him; he often dreams about his beliefs.

In 1987, the family moved to the Netherlands to live with relatives in Wateringen.
In Rotterdam, Carlos first spent a number of years at a school for children with severe learning difficulties. Due to considerable care and attention, he was able to gain a basic education at this school. A dedicated teacher even learnt the rudiments of the Spanish language in order to communicate with Carlos. This education served as preparation for the Pameijer Foundation’s daytime activity centre. Here it was discovered that drawing and painting were important means of communication for Carlos. In 1993, he entered the Atelier Herenplaats for the first time; this was the beginning of his career as an artist. His greatest characteristic is his impassive behaviour. He goes his own way. If he says anything at all, then it is exclusively Spanish; but on the whole, Carlos is incommunicative.

In the initial years at the Atelier Herenplaats, he painted abstract forms, and areas of colours reminiscent of Mark Rothko’s work. The colour red dominated in his paintings. Later he mixed the paint in such a way that bright colours were created and he also worked more figuratively. His mother says that at home he also makes drawings of figures which are renditions of himself. He uses them to indicate how he feels. In this way, he communicates with his environment. The countless pages full of drawings of figures are intriguing; no single page is the same. His figures display a marked similarity with the statues from the Chorrera and Bahia cultures, two ancient South American cultures. Evidently this culture is so interwoven with Carlos’ person that the images that he creates himself, resemble the images which were made 1.700 years BC in South America.

The Carlos we see on a daily basis, quiet, withdrawn, is different from the Carlos who draws and paints himself on paper and in paintings. In these he is exuberant, in form as well as colour. The double self: Doble Yo. In his last series of drawings dating from about a year ago, small abstract forms can be seen, all of them drawn in coloured pencil. They are forms which we cannot recognise, forms which raise questions and kindle our curiosity.

1999  Out of the blue, Gallery de Slijperij, Geel, Belgium

2011  “Down Here, Down Under, Galerie Herenplaats, Rotterdam 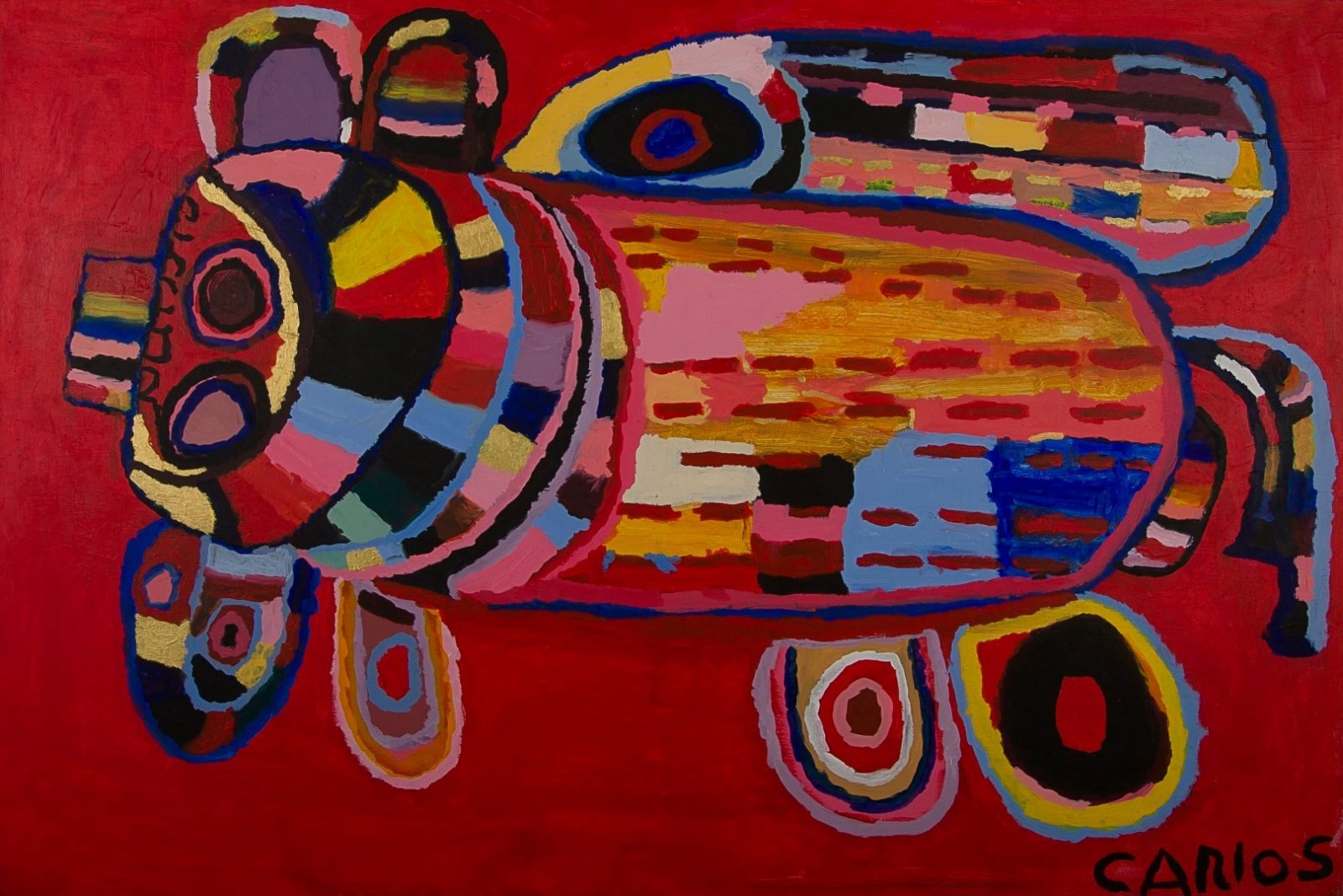 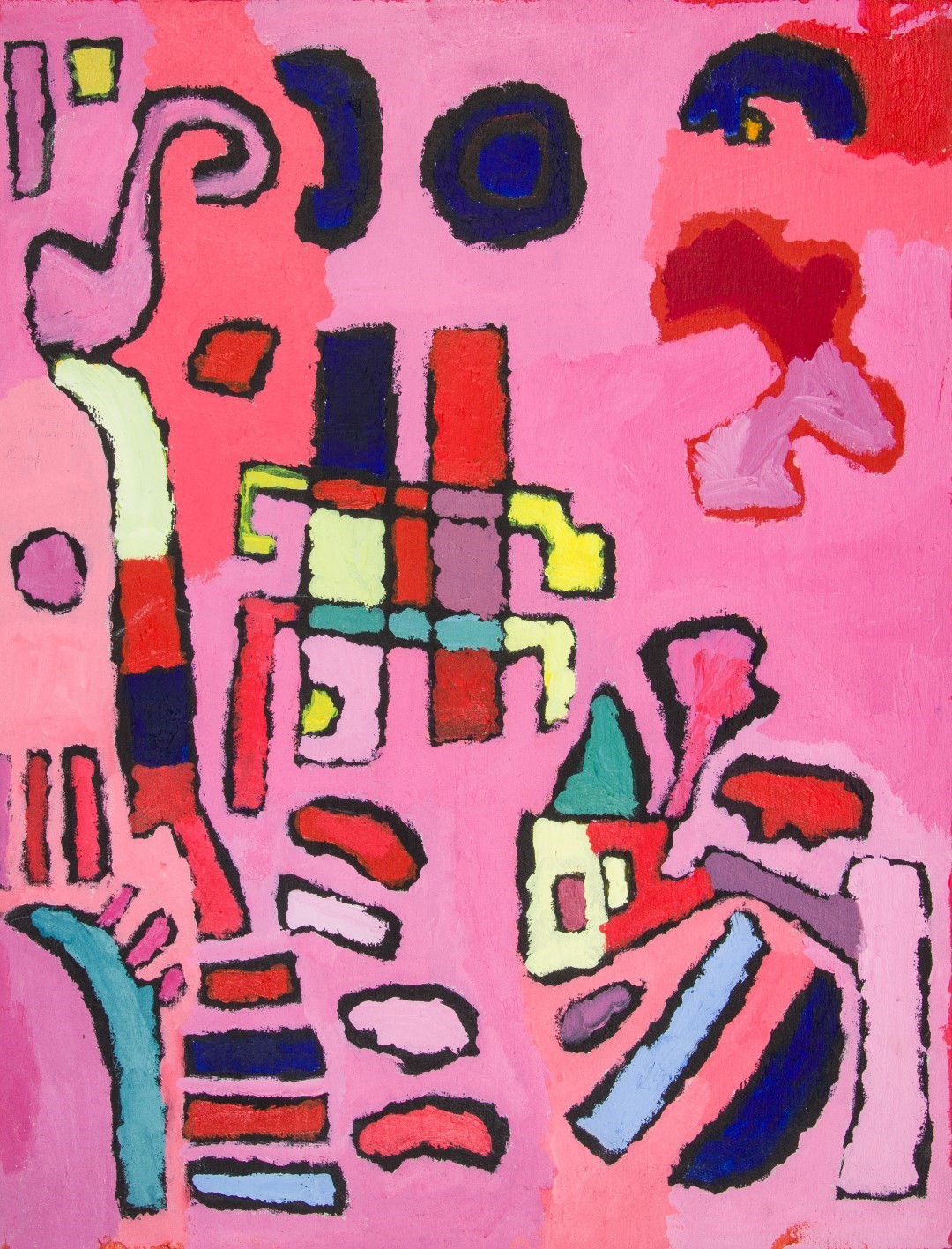 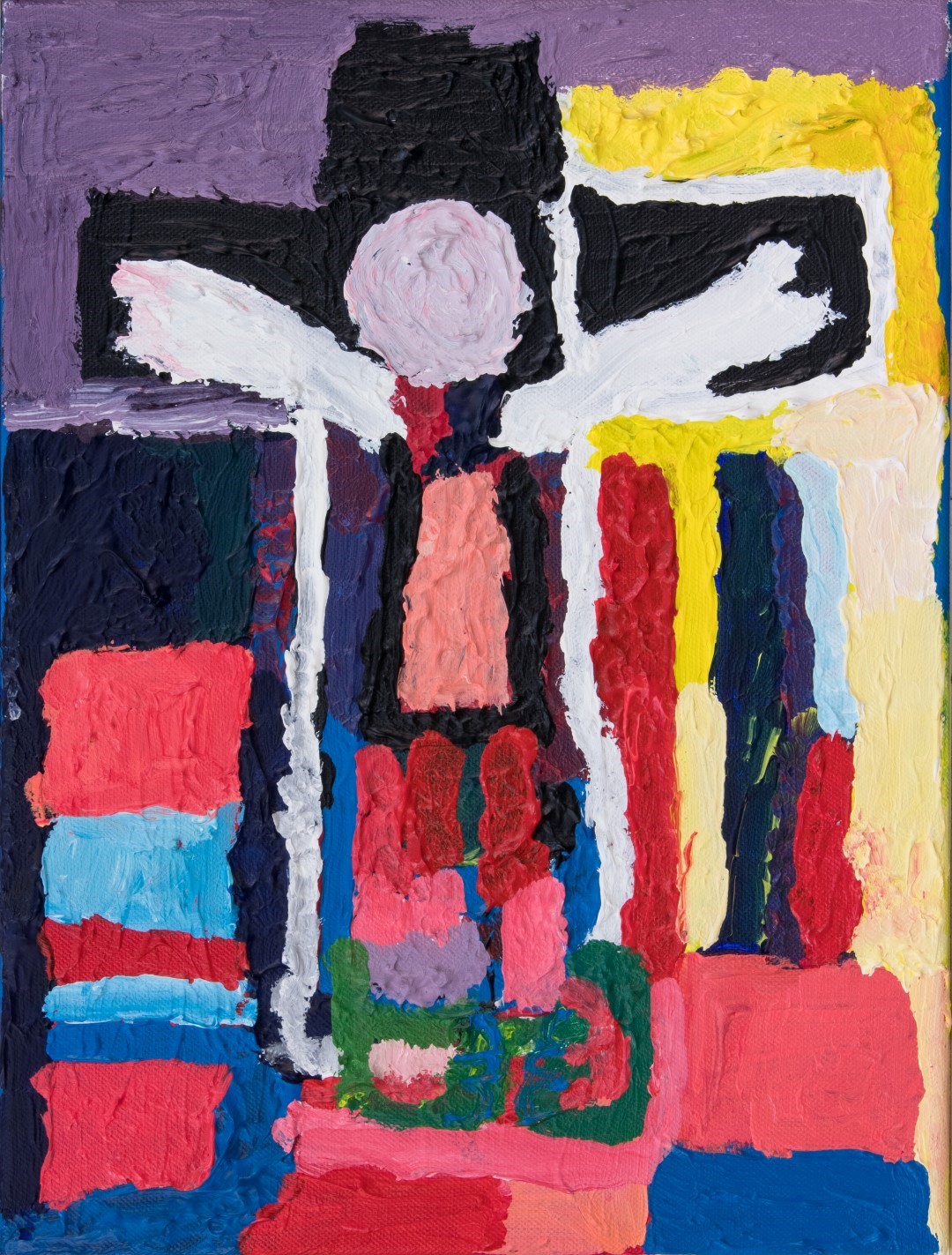 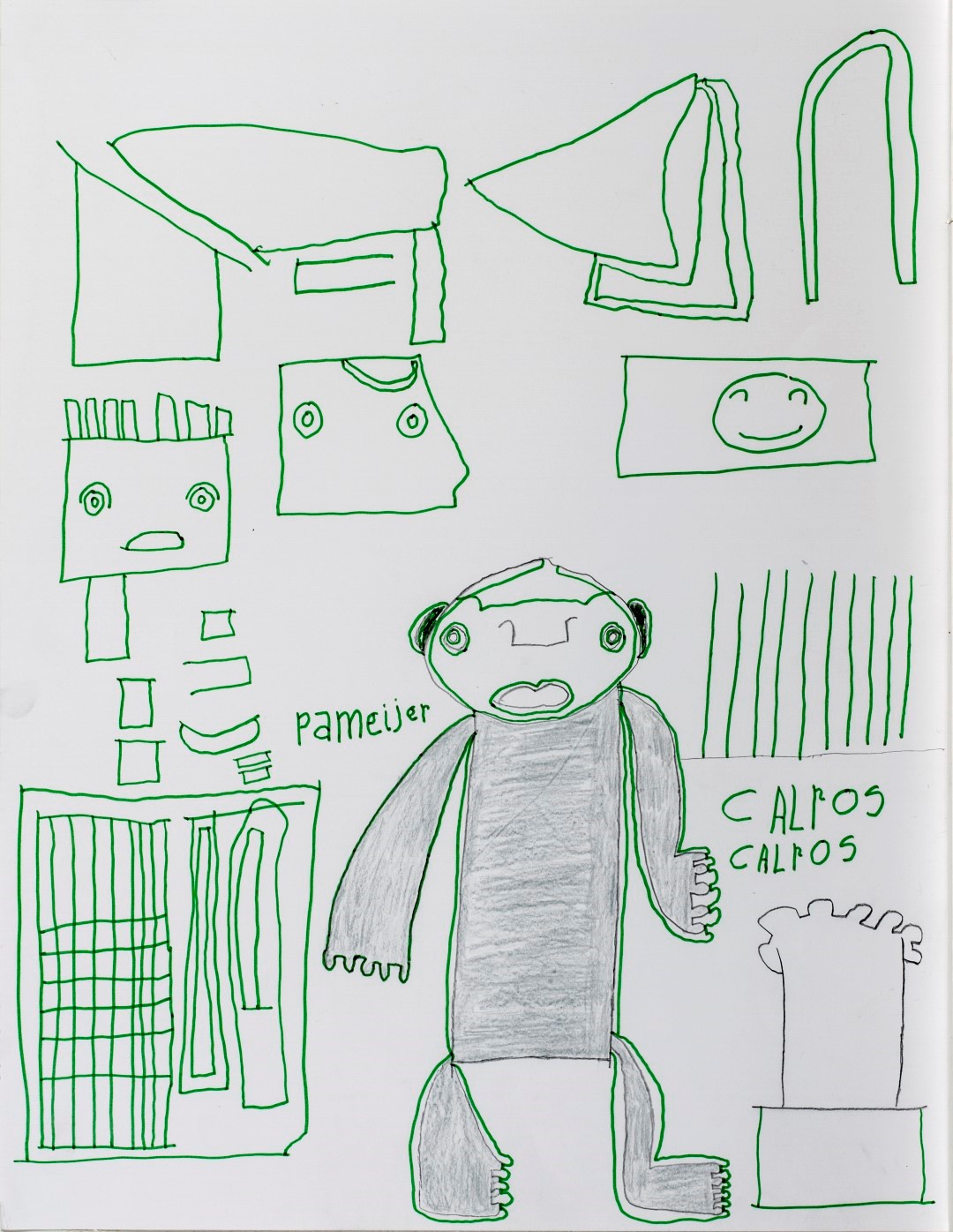 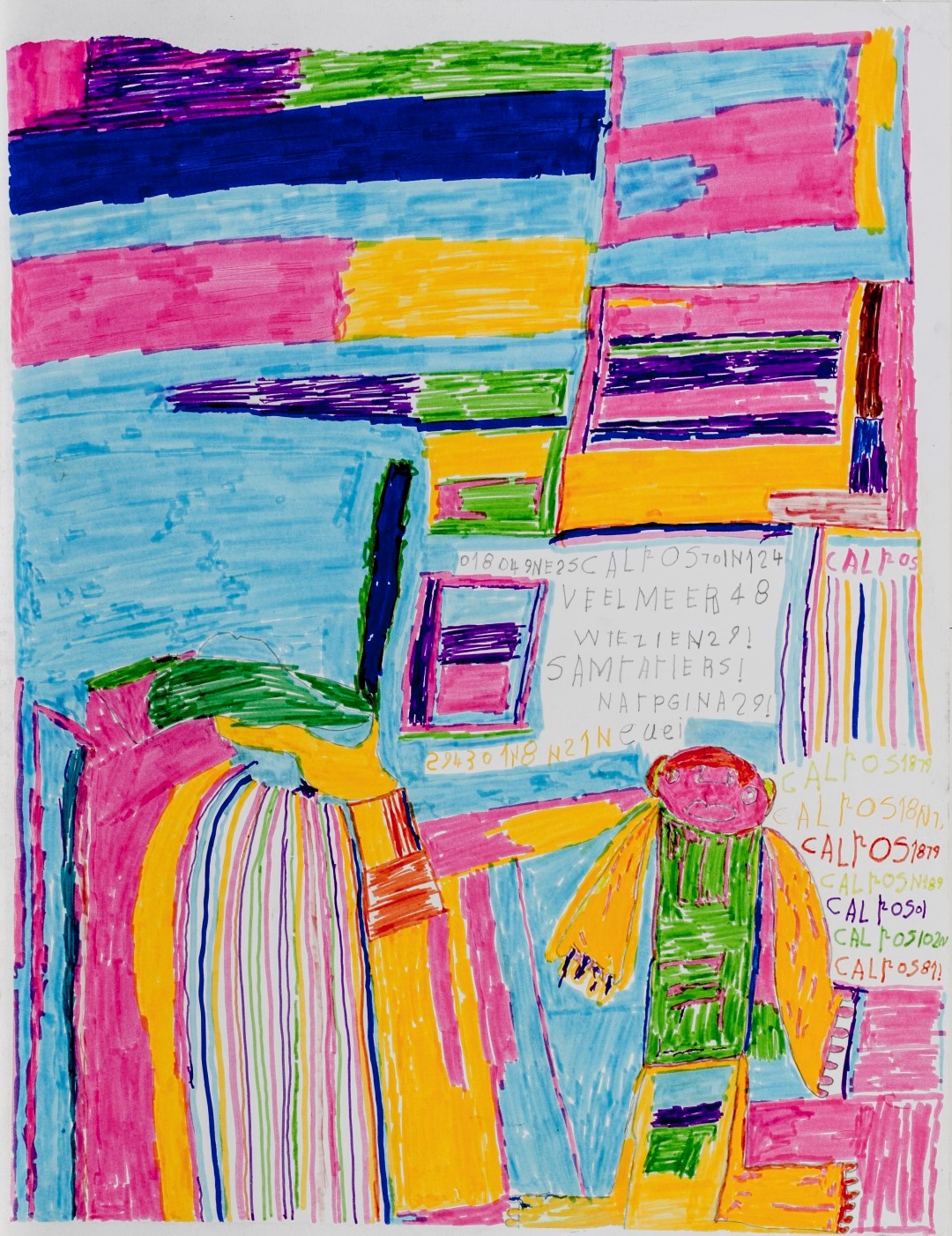