Louise’s paintings are like a diary. Each work tells a story from her life: the holidays, a visit to a museum or just her thoughts. Often the title offers a clear reference to the source of inspiration, such as ‘Alcohol museum’, ‘New York’ and ‘Experience it all in the Arse-nal’. Strikingly, the paintings that Louise makes are in memory of loved ones, such as the paintings about Chrispijn, a housemate who died, and about her mother Aleid.

In the paintings ‘Aleid’ and ‘Lijnbaan’, for example, Louise summons up memories of her mother. ‘Lijnbaan’ represents the Rotterdam shopping street where Louise regularly shopped with her parents. Amongst other things, she paints a shop window, a clothes rack, a clothes hanger, jewellery. At the very top, almost inconspicuously, is a small cross. ‘That is specially for Aleid. So I can think about [her] more.’
In the painting ‘Aleid’, Louise’s parental house on the Gijsinglaan is depicted. Through the walls we can look inside and see an enlarged display of all sorts of jewellery, which for Louise symbolise her mother. In the clouds above the roofs there is a small portrait of Aleid. ‘And here, around the house, are her arms. They are giving the house a cuddle’.

Throughout the years, Louise has brought a certain routine to her working methods. All her paintings originate in her sketch book, which she takes with her everywhere. She begins every drawing with a frame, in which the rest of the image is placed. This sketch, including the frame, is then transferred to canvas. She then fills it in, area by area, with various colours. The image grows at a steady pace. Finally, she outlines all the forms with another colour. Once the last line has been placed, then the work is finished. This working technique requires considerable patience and precision. With passion and discipline, Louise works for weeks and weeks on one painting.
Because of all the brightly coloured areas, the work initially appears to be an abstract mosaic. Yet every form has a meaning. In more recent work, Louise has painted a few areas in black, so that ‘the light colours surrounding them appear to be even lighter.’ In the canvas ‘New York’, in which a man in diving gear is depicted, the black has a second meaning too: ‘That’s because under the water it’s dark.’

Louise’s work contains considerable symbolism. The painting ‘The biography of Chrispijn’, for example, is a compilation of all sorts of memories of Louise’s dead house mate. The five disco lights in the bottom right-hand corner symbolise Chrispijn’s love of music. The little squares on the bottom left are the pebbles of the gravel path at the grave yard. The flames on the centre right, are the flames which illuminate the open hearth in their house. A candle, the stars in heaven and a cross are further depicted. In the centre there is a large heart. ‘That is the biography of Chrispijn: a sort of funeral with a heart on it.’ There are ten arrows sticking out of the heart. ‘Well, arrows are for remembrance, of course. That means that I think about Chrispijn. A lot of remembrance, exactly through the heart.’

1993  Greenpeace printed one of her paintings on childrensweaters

1992 Painting, printed on sweaters for Greenpeace 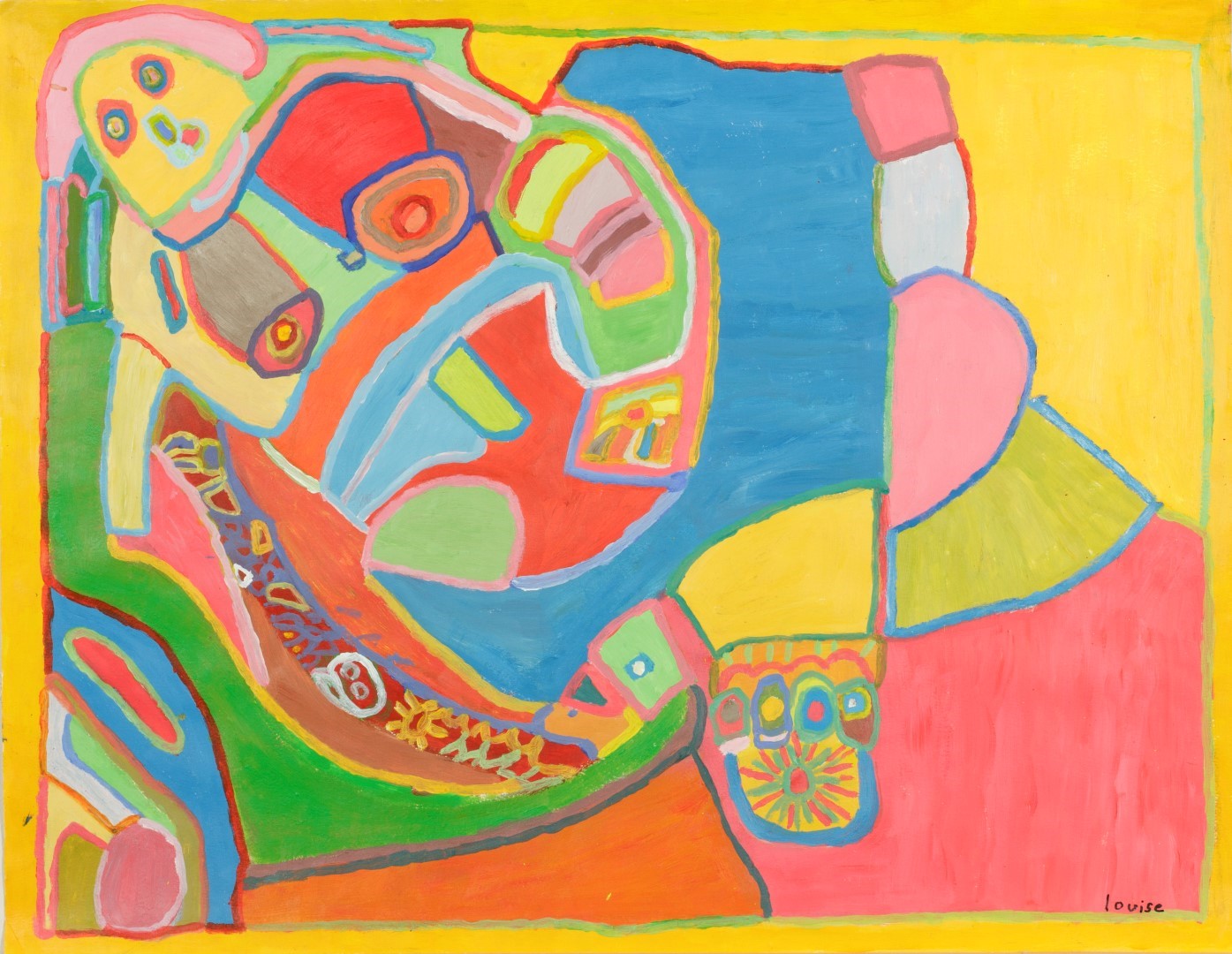 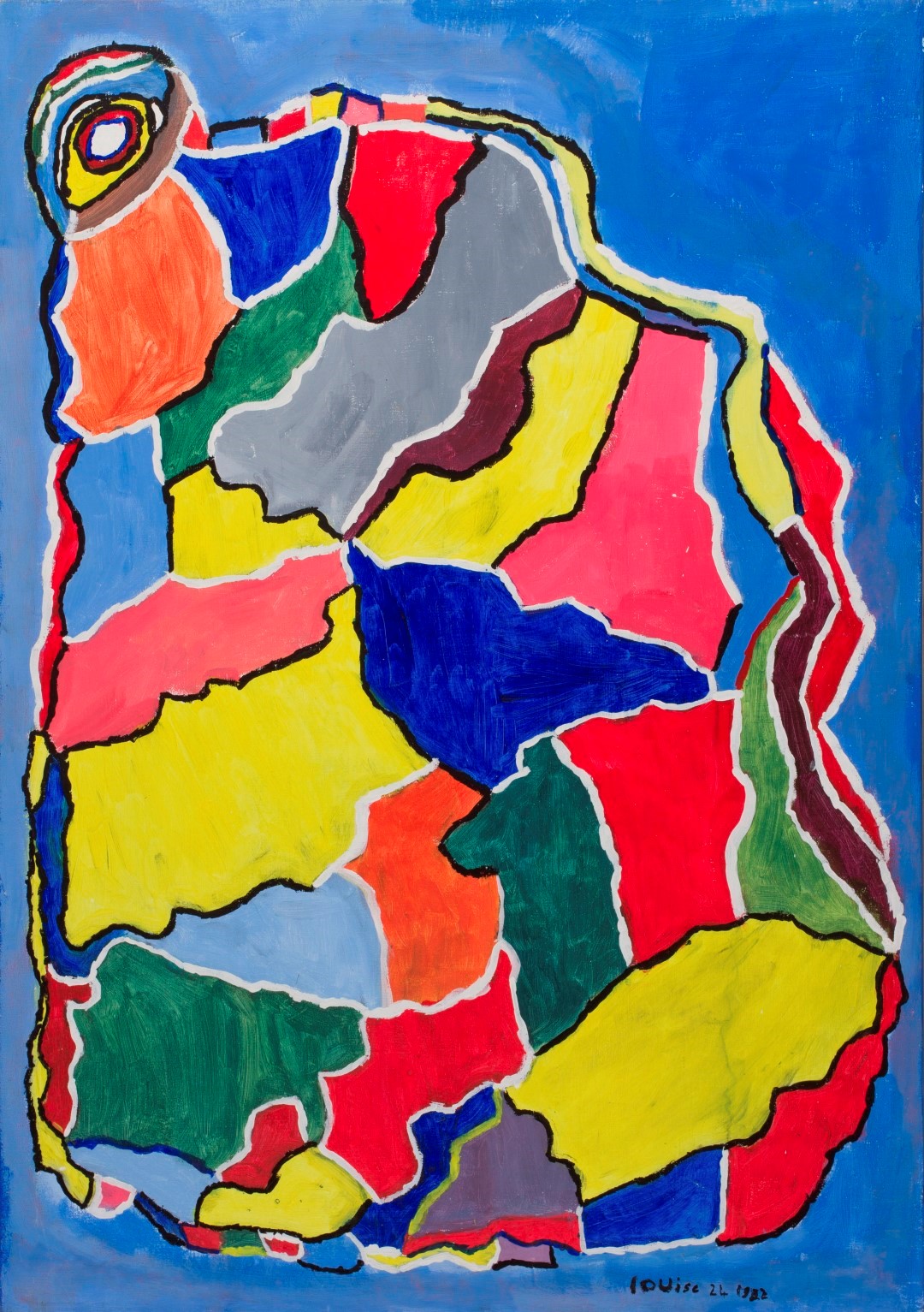 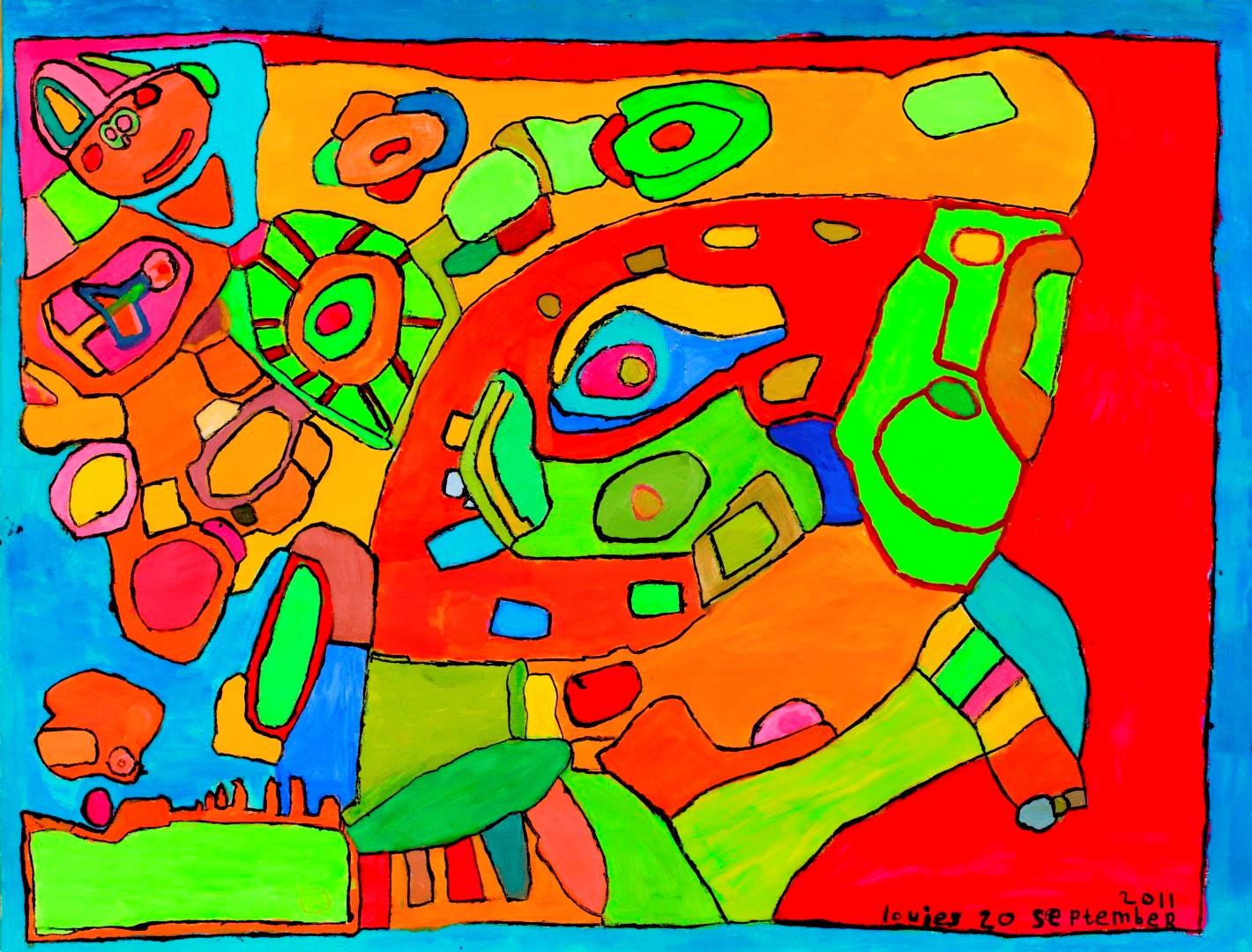 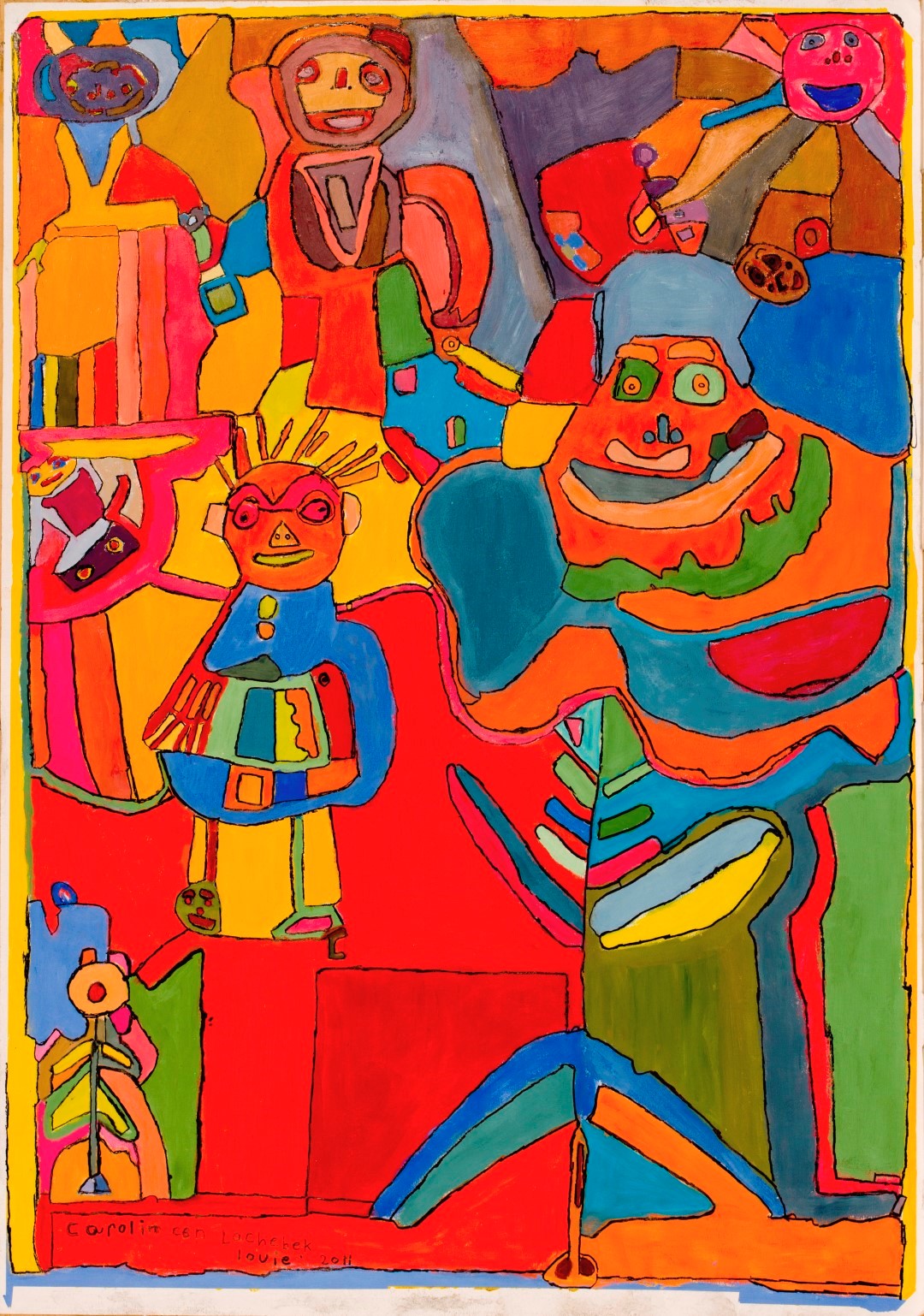 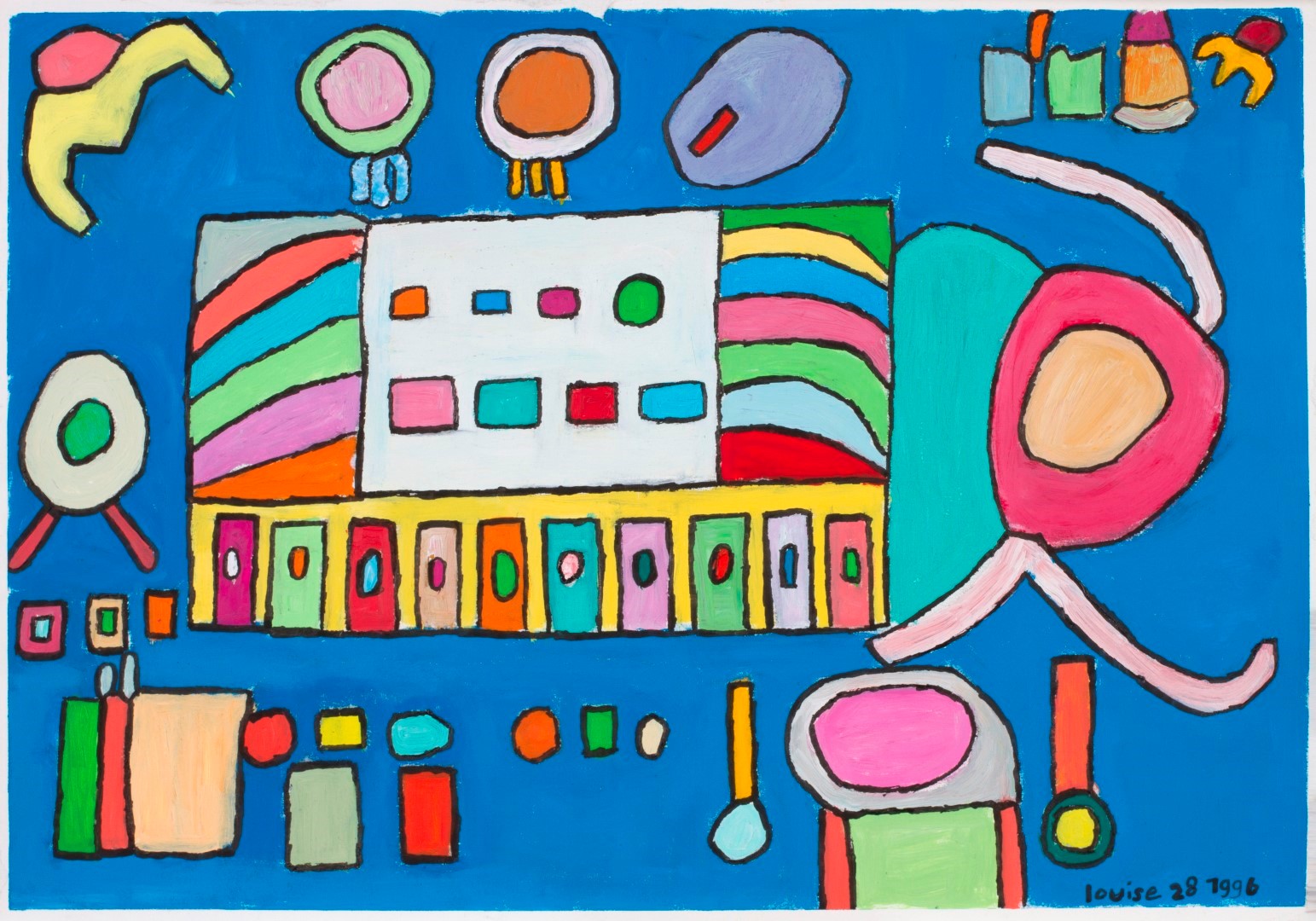