Speed, perspective and depth are all elements of the work of Merlijn, the theme of which revolves around motion and transport. His futuristic trains, cars and helicopters seem to come from a deferent world, a high-speed world where the human plays a secondary role.

Merlijn is one of the youngest artists of Atelier Herenplaats. After an internship period he began in 2005, through the Amman College (a school for student with communication disabilities). He works since 2006 as a permanent member of the collective.

According to Merlijn he inherited his talent from his father, who was a packaging designer. It was he who taught Merlijn the principles of perspective drawing. Merlijn continues drawing obsessively at home, which has to do with his fascination with speed and motion and with his autism.
Merlijn also uses text in his work: High Speed rail, Randstad Rail, Inter City Express, Holland/Japan, Turbo, Fast/Slow, all related to his drawings subjects.
He shows me his pencils drawing box. The 30 Caran d’Ache pencils are neatly ordered according to the colour wheel. The pencils of the Metallic line of Bruynzeel are also special favourites of Merlijn. He also makes good use of his grey pencils, carefully ordered from 2H to 9B. It is easy to see that he prefers the HB, which is by now half as long as the rest.
Details are very important in the work of Merlijn. He knows everything about the way the pantographs (electricity collecting devices on top of electrically driven locomotives) of his trains are constructed and how he should draw them. The front and back brake claws hold no secrets to Merlijn. They appear in detail in his drawings.
Merlijn is also fascinated by reptiles and amphibians, especially the venomous ones, which he often combines with his futuristic means of transportation.
Merlijn’s intimate drawings introduce us to the virtual reality of the computer game. Terms such as Fire Bird, New Body Kit, Steering Wheel, Spinner and Body Accessories and games such as Butterfly by Amiga, Knight Rider and Ridge Racer are important sources of inspiration.

Since August 2011 Merlijn Korner works no longer at Herenplaats. 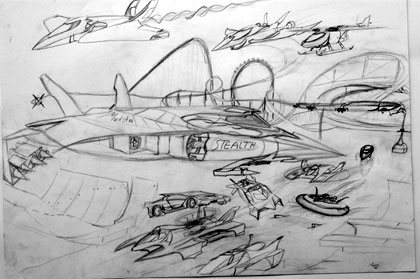